Skip to content
This article has links to products and services we recommend, which we may make commission from.

Home cooks can spend many hours in the kitchen, using their kitchen knives to cut, chop, dice and slice all kinds of different foods. That’s why it’s incredibly important to know your kitchen knife basics. If I asked you what a kind of cutting board is best to use with your knives, or what a chiffonade is, would you know the correct answer?

If you can’t answer these questions, maybe a few quick lessons are in order. Once you’ve mastered these basic kitchen knife skills, you’ll be better prepared to get in the kitchen and chop up a delicious meal like a pro. If you’re looking for some shortcuts, we recommend reading this guide by A Food Lover’s Kitchen that gives 15 fantastic time-saving tips for new cooks.

We’ll start with the basic kitchen knives that every home cook should have in their kitchen. There are three basic knives that will come in handy the most, for every day tasks in the kitchen. While kitchen stores often try to sell you an entire block full of kitchen knives, you really don’t need all those knives. In fact, you’ll probably find that most of them won’t get used regularly, if at all. If you only purchase these three knives, you’ll be all set (see our guide for which kitchen knives to buy.)

A chef’s knife is generally about 8 inches in length and can handle a multitude of jobs. It’s good for slicing, dicing, cutting though tough meats (just don’t use it on bone!). It’s the universal knife. If you use it with a rolling chopping technique, it can also be quite quick at getting the job done. However, the chef’s knife is too big for delicate jobs. We love these Japanese chef knives – the blade is so sharp and this knife is very versatile.

The paring knife is much smaller than a chef’s knife. It usually measure around 3 inches, and the handle is much smaller and easier to control. This knife is what you’ll want to use to peel an apple or potato, making a fine dice, or a chiffonade. If you like making cocktails at home with garnishes, this is the knife for you.

The first time you try to slice a bagette with a chef’s knife, you’ll be wishing you had a serrated bread knife. While this knife is really only used for one thing, it is used often because who doesn’t love bread! Cutting thin slices of bread is possible without damaging the entire loaf or compacting it down into a puck if you use a bread knife.

Sometimes I bypass all of those knives for the one knife that can do it all: the Utility Knife. Not everyone loves the utility knife, but I definitely do. It’s usually around a 4-6 inch blade with a thinner handle and it is very versatile, being able to take on the job of all the other knives fairly well.

You don’t really need to know all of these terms if all you’re doing is occasionally cutting up some vegetables for a salad. But if you want to be able to read recipes and actually be able to perform the type of cut they ask for, it’s a good thing to know a few basic cutting techniques.

I think we all know how to peel something. You’d typically want to use a paring knife to do a good peel. The blade is thin, so you’ll be able to shave really close to an apple or potato to remove just the peel and nothing else.

Slicing is another fairly common term, which refers to simply slicing through a food. Slicing a cucumber, for instance, will result in thin or thick disks of cucumber. Slicing a carrot, potato or even meat will also produce the same result.

Those skinny sticks of vegetables that are often used in Asian cooking are called Julienne. If you wanted to make french fries, you would julienne the potato into long skinny strips. Carrots and zucchini are also often julienned.

There are many different types of dices. A smaller dice is called a brunois, while a larger cut is called a dice. If a recipe calls for you to dice something, aim for roughly 1/4″ cubes.

☆ Want to know how to keep your knives sharp and working great? Read our article on finding the right knife sharpener for you.

The Proper Way to Use a Knife

Now we’ve come to the most important part of the lesson, how to properly use a knife. If you use the claw technique whenever you use your knife, you’ll protect your fingers and avoid accidents.

You may think that a chef’s knife is too heavy to use and that might be because you’re holding it wrong. You should hold the knife with your hand close up on the handle, your second finger resting against the heel of the knife, and your forefinger and thumb pinching the lower part of the blade. Your forefinger should not be resting on the back edge of the blade.

To use the claw method, hold the knife in your dominant hand and make a loose claw with your other hand. Rest your claw on top of the food you are cutting to hold it firmly in place without your fingers being exposed to the blade. The blade should be placed near your bent knuckles without touching them. Now you can cut without exposing your fingers.

We came upon this awesome infographic that will quickly show you the difference between all of the kitchen knives that are likely hanging out in your kitchen knife block set. It will also show you a few different techniques for cutting that are used by professional chefs everyday in restaurant kitchens to streamline their efforts.

If you aren’t sure where to find the tang of the knife, or what to use a boning knife for, this is your guide to learning those all important kitchen knife basics!

(Disclaimer: This post contains affiliate links for which we receive a small commission.)

I’ve spent many years in the kitchen so I know how important it is to have good, sharp knives and tools to work with.

I've spent many years in the kitchen so I know how important it is to have good, sharp knives and tools to work with.

One thought on “Kitchen Knife Basics Every Home Cook Should Know” 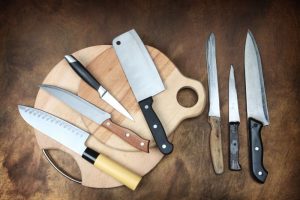 How Often Should You Sharpen Kitchen Knives?

Disclaimer: As an Amazon Associate, I earn a commission from qualifying purchases made through the links on this site.